Feeding the Monks in Bangkok: A Lesson in Humility

By LocalConcept March 29, 2016 blogpost No Comments During my last visit to Bangkok, I sat in the lobby of my hotel looking at my next day tourism attraction. Although the temples are absolutely stunning, I had already visited them. I considered the option of waking up at 4:30 am and watch the monks being fed. It sounded intriguing except for the wake up time.

To give some background, Alms is a monk tradition where they go into town every morning to gather food donations. This tradition is supposed to simplify the lives of the monks since they count on the common people to donate food, clothes, and shelter in return for guidance. I showed up at 6:00 AM to watch the monks leave the temple (wat) on their way in search of food. 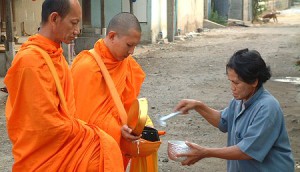 There were lines of cars waiting to donate. I watched how this process was done. You raise a small bag of food (rice, curry, fruit) up at waist level once you see a monk coming towards you. The monk would then stop, open his alms bowl, and the person would place the food in the bowl. If you are a woman, you would need to kneel in front of the monk and in no way touch the monk. Witnessing this exchange made me emotionally withdrawn.

This concept of appearing in public as someone with no earthly possessions depending on other people’s kindness showed me a level on humility not found within the Western culture. If this was to happen in San Diego, people would doubt if he was truly a monk or just dressed in such a way to get free food.

The monks faces were emotionless.  They had a sense of dignity.  There would be no eye to eye contact, no thanks, only a short teaching given by the monk. This is not a form of charity, but a way to show respect and earn merit. There is no touch and the interaction is brief.  I tried this ritual and found myself at peace, at least for as long as I stayed in front of the monk. It was a great lesson in humility.